“Nowadays the solutions that are brought forward to restructure the healthcare system, barely can one understand on first glance due to the complexity and the different ´type´ of people that are affected: doctors, social workers, managers, patients … and also politicians – all speak ´their´ language. Therefore not only a solution is needed to be presented to the audience, it also needs to be explored by the ones who will later use it.

This is the way of the future: virtualization technologies that one can ´walk-in´. Walkable 3D-systems in an open 3D-internet, in architecture, health and in the arts, but it is also good to mention that a great part of the speed comes from the flight-simulations and military simulations. So its good to face this technology at an early stage, and not only to get informed, but also to explore it and let it become an acting part in our lives, as this century will be known as the dawn of virtualisation.” Reiner Schneeberger at The Cheiron Talk, organized by IPAC (International Paros Art Circle) Greece.
There are a different concepts in virtualization. MB-Technilog is at the cutting edge in the technology of the 3D-Internet. We use Open Source, called ´opensimulator´which runs with Linux and Windows on a my-SQL database. That makes the difference. And we exchange and collaborate with developers all over the world as well … 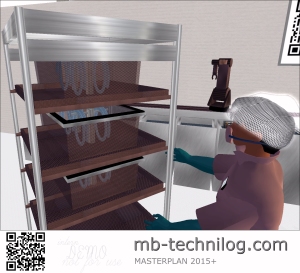 The walkable environment by MB-Technilog

Avatar was controlled in real-time by Robert Schrödel

3D environment by Fraunhofer / Charite´, made available for MB-Technilog